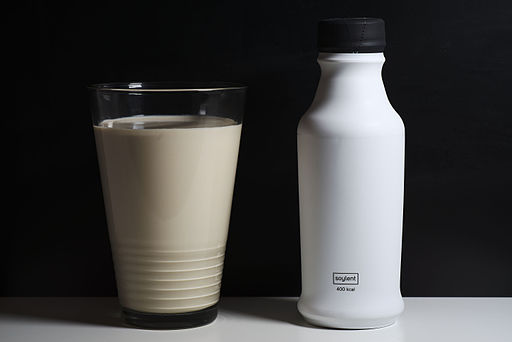 In January 2017, the number one grocery product sold through Amazon was a meal replacement drink called Soylent (Watson 2018). Soylent is, according to the company website, an engineered nutrition drink consisting of soyprotein, slow-burning carbs from beets, oleic sunflower oil, and 26 vitamins and minerals. The composition of the drink has been engineered so as to “offer all the same nutritional benefits as a complete meal” (Soylent 2019b_blog). Soylent is a product with a strong mission statement. With this product, the company aims not only to “sell the best meal replacement shakes”, but to “help bring an end to food voids, hunger, and food insecurity” (Soylent 2019c_our-mission).

The kind of food insecurity Soylent Inc. aim to alleviate was demonstrated by the US government’s shutdown in the beginning of 2019. Here federal employees did not receive a salary due to lacking agreeing on the fiscal budget for 2019. On January 11 where people would have otherwise gotten their pay-slip, several companies extended discounts to the federal workers. Among these were Soylent (Bendix 2019). With a diet of five Soylent drinks adding up to 2,000 calories a day you could, with the discount, feed yourself for just less than 6$ a day (ibid.). An attractive alternative, as one federal employee puts it, to the all-ramen diet he and his wife had envisioned they would go on in order to save the money for their child’s nutrition (ibid.). All-ramen diet was something I had to google. It means feeding yourself only cheap, instant noodles. This is exactly the kind of low-quality fast food Soylent means to take on. I have chosen Soylent to go in this mix because it constitutes a ‘total solution’ and not only to low-quality replacement meals but to a wider set of global relations.

Soylent originally started out as a cheap and quick solution to the bother of having to eat faced by founder Rob Rhinehart, a driven Silicon Valley-individual, who saw eating as a time-waste to be eliminated. But once he got down to business and started composing his shake of all the nutrients one might need, he realized the potential of his innovation. Situated in the Californian tech environment his back drop for action, like Thiel’s and Musk’s is a world on a set course for catastrophe, characterized by a “rapidly growing population, and rapidly diminishing resources” (Soylent 2019a_about-soylent).

“Earth’s population will reach 9.7 billion by 2050, and feeding that many people will require a 70% increase in food production. With 38% of land already used for agriculture and 41 million people in American alone struggling with food insecurity, finding solutions to our food access concerns cannot be ignored.” (Soylent 2019a_about)

Rhinehart describes himself, as a ‘fallen libertarian’. He believes in “maximizing freedom, but he hates the waste of capitalism” (Widdicombe 2014). Having taken this perspective Rhinehart, is in favour of engineered food. Farming, he thinks, is inefficient, a waste of ressources, and should be more, not less, industrialized (Widdicombe 2014). For him, then, it becomes imperative to “change how the world thinks about food” (ibid.) which is why they are overtly stating to be ‘pro-science’, ‘pro-GMO’, and ‘pro-sustainability’. On the backdrop of population growth and planetary over-exploitation, it becomes unethical to be pro-organic farming. They want to keep, not only the human body, but also the planet healthy (Soylent 2019b_blog). Thus proteins from the soy plant has been chosen because it “takes fewer resources to produce than other proteins” (ibid.). Organic farming might be good if seen in isolation, but if your outlook it the planet and the whole of humanist it looks like a wasteful approach to getting your nutrients.

Soylent has a strong online community of followers and people who ‘hack’ Soylent recipes and it does not take long to establish a link between Soylent and Mars: “I am assuming Soylent or some other Soylent-like meal replacement would need to be utilized to optimize nutrition-to-weight cost ratios for consumption both during travel and when on Mars?” (Inquirerer, September 2016, discourse.soylent.com). Over the following month, the question generates 85 replies. One tweeter remind him that the sensory experience of ingesting food and the ritual of preparing it are key human experiences which will most likely lead people to opt for a local food production. Another one reminds the discussants that growing food locally on Mars will have the secondary effect of cleaning the air. Algea, would be the obvious choice “given time and dollar for research.” But then, as someone asks: “Rather than take obviously suicidal missions to Mars, why not figure out how to use land more efficiently?”

Given that Soylents followers are a community of tech-savvy, science-lovers, I had hoped the debate would take the shape of discussing what might be the best option food-wise for interplanetary travel and extraterrestrial settlement? Or perhaps more plainly: What is the function of food for humans?  Instead, it quickly derails into a discussion about whether or not we are actually living in a simulacrum and might be replica of a prototype self in a parallel world. How would we know, right?